The truth about wind power

Some recent press coverage on wind turbines calls for correction of the mis-statements made in these articles. The first one to appear was by the RTE Rugby correspondent Tom Mc Gurk.  He is under the impression that the developers of wind turbines are in receipt of grants. There are no grants for wind turbines in Ireland.  Wind is now a very accepted way of making CO2 free electricity. In Ireland the wind powers 18% of the country’s total electricity generation. A recent report from the Paris based International Energy Agency  stated the following facts: “Despite a tough year economically across many of the traditional renewable energy strongholds, such as Spain and Italy, installations and manufacturing capacity continued to grow strongly in 2012. Renewable energy now accounts for 26% of total electricity capacity and over 50% of new electricity generation additions in 2012 were from renewables. The report highlights the following major trends: Major trends in 2013: •         Investment in new renewable energy capacity: US$244 billion •         Solar PV received over 50% of global renewables investment, with $140 billion •         Increased focus on renewable heat enabled through CHP and district heating systems •         Emerging markets in Asia, Latin America and the Middle East and North Africa creating buzz as renewables investment grows •         5.7 million people work directly or indirectly in global renewable energy industry Regional highlights: •         China: wind power capacity grew more than coal for the first time •         EU: renewables made up nearly 70% of new power capacity additions •         US: capacity additions in wind were larger than all other types of generation technology combined Technology highlights: •         Cumulative installed capacity of solar PV passed the 100GW mark •         2012 Wind installations hit 45GW, thanks in large part to strong growth in the U.S. and China •         Offshore wind accounted for 1.5GW of that, bringing cumulative offshore wind capacity to 5.4GW “ Tom thinks, or at least he states, that wind turbines are built “to make money not energy”  Interesting concept.  Since I began building wind farms in 1992, the only way money was made was by selling the electricity that they generated. No electricity, no money. Tom also questions employment that ensues from a renewable energy programme.  The IEA states above that, globally nearly six million people work in renewable energies, be it manufacturing,  servicing, operating, maintaining, designing, teaching, planning, or researching. If Ireland and the UK can get their acts together they will finish up supplying all of Northern Europe with a large proportion of their much needed renewable energy.  This they will do from wind farms at sea and on land.  Probably after 2020 the great majority will be from offshore wind.  Why will the new manufacturing not be done close to where the turbines will be deployed? I can state that even when the turbines came from China to be installed in Illinois, there was a 70%  local job content. Tom also states that bad health results from turbine installations.  Depression, anxiety,  sleeplessness, tinitis.  He cites an article from the British Medical Journal, as backing up his claims.   Having read this article, there can be no basis for the claim of damage to health.  The research into bad health is quite conclusive...............there isn’t any.  From  Massachusetts to Christchurch and all  points in between nimby’s have forced the authorities to study the effects of wind turbines on  health.  all conclusive: no ill effects.  Of course that doesn’t deter individuals from  writing anything  they want. However people like Tom can cause bad health.  Recently there were two studies carried out, one in Australia and one in New Zealand.   Two groups of ordinary citizens were set up.  One group was told all about the damage to their health that followed from exposure to wind energy, the other were given no such information.   When each group was exposed to the wind farm eventually, the  group that had been told they would be sick, in fact got sick, and the others showed no signs of  illness. So those who mis-inform their fellow citizens about illness, do them a dis-service.  The power of  suggestion is the operation principle.  Unnecessary pain is caused by nimby’s who throw any old  statement to frighten the local people into opposing wind developments. A similar reasoning applies to property values.  There is no evidence that property values fall when  wind turbines are placed in the environment.  Study after study has been carried out and there was  no evidence that property values go down.  The following should be bourne in mind before  causing worry to local homeowners. Reduction in house prices from peak values in 2007Why have property values fallen less in counties with lots of wind turbines, than in those counties with none? Building wind farms in an area increases the economic activity locally.  More people work and  live  locally all other things being equal.  The demand for houses goes up, with the inevitable consequence that the price does as well. Usually the nimby’s talk of the impact on tourism of wind farms.  Well, all the evidence suggests  that tourism revenue goes up.  The general public are interested in wind farms.  They come to see them, these examples of rural architecture rendered in poetry.  The graphs below show tourism numbers in Cork and Kerry plotted against the significant number of megwatts of wind power installed in these counties. Cork: Tourism vs Wind Turbines 2000 – 2011 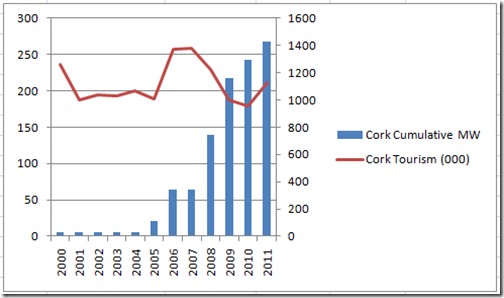 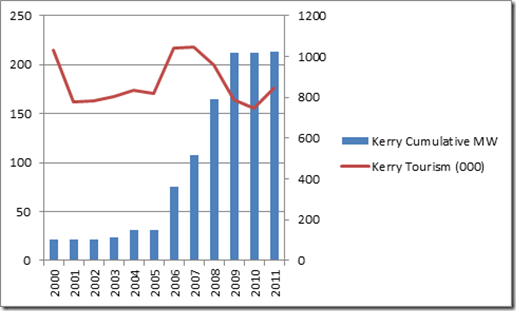 The Sierra club of Southern California leads walkers annually for a stroll among the thousands of wind turbines that line the Tehacapi pass. Tom’s antipathy to the British is written all over his article.  His line of reasoning is that the “Brits don’t want them, so why should we provide the service?”    The population density in England is 8 times what it is in Ireland.  Following guidelines about distance from local houses renders most of  England unsuitable for wind farm developments.  It is as simple as this:  we have the space, they  don’t, on land at least. Furthermore,  if we don’t build these wind farms in the midlands for export to Europe, then this renewable resource cannot be harnessed for domestic purposes as Ireland is already at saturation for domestic wind with its 1,200 turbines already installed on the west coast, and a similar number planned. What Tom and the right wing Tories have in common is an anti-Europe sentiment.  The same Tories who oppose wind farms also want to take the UK out of the EU.  I suppose they see that there are  30,000 wind turbines in Northern Germany, 6,000 in Denmark, 19,500 in Spain and they don’t want  to belong to that club.  There is literally no talk about diminished property values in these countries;  no talk about health problems, or a diminished revenue from tourism.